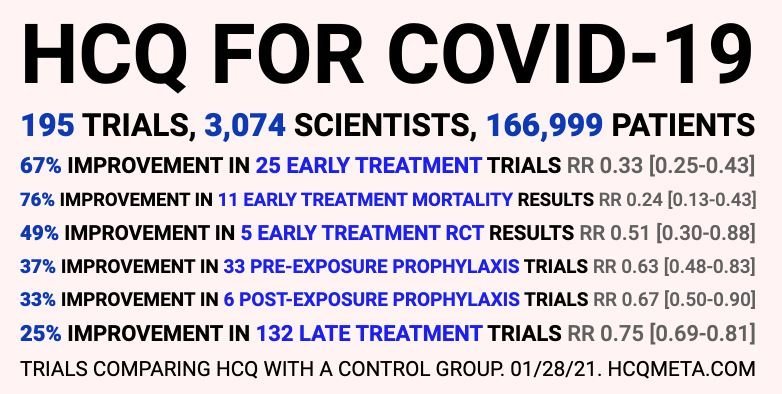 Back in August 2020 we wrote this on treating the coronavirus–

The liberal mainstream media can’t hide this truth from the American public forever.

The latest international testing of hydroxychloroquine treatment of coronavirus shows countries that had early use of the drug had a 79% lower mortality rate than countries that banned the use of the safe malaria drug.

This means that Dr. Fauci, Dr. Birx, the CDC, the liberal fake news media and the tech giants have been pushing a lie that has had deadly consequences!

A new study posted in the American Journal of Medicine in January found that early treatment of coronavirus patients with hydroxychloroquine lowered the mortality rate for the disease.

The study found that immediate use of HCQ, while the patient was still at home, showed significant benefits.

This is just the latest study that shows the effectiveness of HCQ in treating the coronavirus.

For the past several months the website c19study.com has been tracking the HCQ-coronavirus studies.

According to c19study.com there have been 237 studies, 171 of which were peer reviewed that show 67% of patients improved in early treatment trials.

Also today the Facebook Oversight Board announced it was overturning a previous case on the effectiveness of HCQ.

Facebook’s previously removed a post on the use of hydroxychloroquine in France which it claimed, “contributes to the risk of imminent… physical harm.”

Today Facebook announced this was a mistake… Via – The Gateway Pundit

“There’s a lot of people calling for the end of violence, there’s a lot of conservatives, social media, who say that any violence or aggression at all is unacceptable. Regardless of the circumstances. I’m glad Sam Adams, Thomas Paine, the actual tea party guys, the men at Lexington and Concord didn’t feel that way.” ~ Rush Limbaugh

Katie Hopkins – No Jab, No Job!

Jamie Glazov – “Show Your Papers” in the USA.

An Average American – Response To Jeep And Bruce Springsteen.

Tucker Carlson – Glenn Greenwald: Neither political party is on your side

David Zhang – CIA Refusing to Include China in Ratcliffe Report

Liz Wheeler – Where is Durham?!